(*) FFVoile Prescription to RRS 67 (Damages):
Any question about or request of damages arising from an incident involving a boat bound by the Racing Rules of Sailing or International Regulation to Prevent Collision at Sea depends on the appropriate courts and cannot be dealt by the jury.

(*) FFVoile Prescription to RRS 70. 5 (Appeals and requests to a national authority):
The denial of the right of appeal is subject to the written authorization of the Fédération Française de Voile, received before publishing the notice of race. This authorization shall be posted on the official notice board during the event.

(*) FFVoile Prescription to RRS 78.1 (Compliance with class rules; certificates):
The boat’s owner or other person in charge shall, under his sole responsibility, make sure moreover that his boat complies with the equipment and security rules required by the laws, by-laws and regulations of the Administration.

(*) FFVoile Prescription to RRS 86.3 (Changes to the racing rules):
An organizing authority wishing to change a rule listed in RRS 86.1(a) in order to develop or test new rules shall first submit the changes to the FFVoile, in order to obtain its written approval and shall report the results to FFVoile after the event. Such authorization shall be mentioned in the notice of race and in the sailing instructions and shall be posted on the official notice board during the event.

(*) FFVoile Prescription to RRS 91(b) (Protest committee):
The appointment of an international jury meeting the requirements of Appendix N is subject to prior written approval of the Fédération Française de Voile. Such authorization shall be posted on the official notice board during the event. 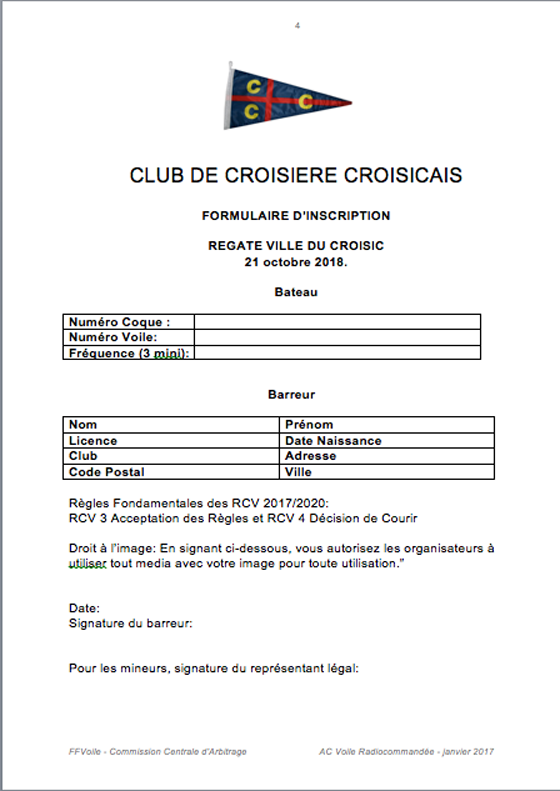